Hebron, located 19 miles south of Jerusalem in the Judean hills, and is the oldest Jewish community in the world.  Hebron is mentioned in 10 of the 24 books of the BIble a total of 87 times..

It figures most prominently in the Books of Genesis, Joshua, and Samuel II.  In Genesis, Hebron is central to the story of the Jewish people’s origins. In Joshua, it plays a key role in the story of the Jewish people’s re-establishment in the Land of Israel.  In Samuel II, Hebron is critical to the formation of a united Kingdom of Israel under King David.

The Book of Genesis relates that Abraham purchased the Tomb of the Patriarchs and Matriarchs and surrounding field as a burial place for his wife Sarah from Ephron the Hittite for 400 silver shekels (Genesis 23).  This was 3,800 years ago. Jews have lived in Hebron almost continuously from Biblical times to the present.

According to the Bible, the Patriarchs Abraham, Isaac, and Jacob, and the Matriarchs Sarah, Rebecca, and Leah are buried in the Cave of Machpelah.  The burial of the these three holy couples, the ancestors of the Jewish people, make Hebron the second holiest place for Jews in the world and a place of pilgrimage for monotheists worldwide. 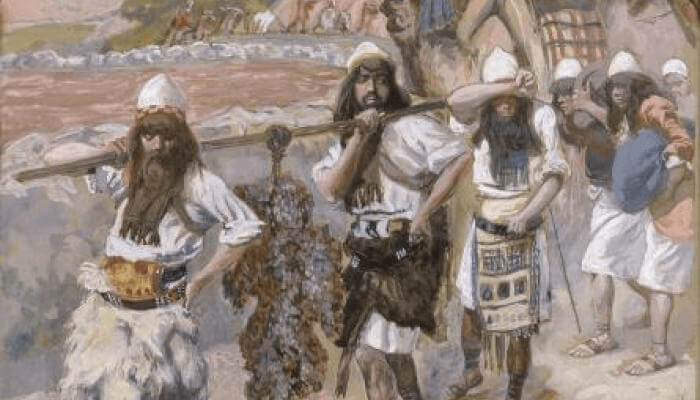 In the Book of Joshua, Hebron was given to Caleb as a reward for his faithfulness  and as part of the the land apportioned to the tribe of Judah (Joshua 14:14). The first chapter of the Book of Judges tells of his conquest of Hebron, formerly Kiryat-Arba.

Hebron remained an important Jewish city throughout the period of the kings, until the conquest of the land by the Babylonians in the year 586 BCE.

From ancient times, the hills around Hebron have been known for their fertility, especially for grapes used in wine production. Lying at the heart of the tribal territory of Judah, these hills reflect the blessing of abundant grapes given to Judah by his father Jacob (Genesis 14:11-12)  Many ancient wine presses have been discovered in the area and the region is still known for its vineyards. There are a number of wineries in the area, and some of their wines are winning awards in international competitions.

When the Jews returned to Israel after the Babylonian Exile in the 5th Century BCE, many settled in Hebron. Here, around the tombs of the Matriarchs and Patriarchs, Israel began to rebuild its national strength.

It was during the Hasmonean period (the period of the Maccabees, around 150 – 63BCE), in which the first structure over the Cave of Machpela was constructed.  Later, King Herod the Great built a grand building on top of Cave of Machpela in a style to match the Second Temple. Today, the Tomb of the Patriarchs and Matriarchs complex, is the world’s oldest still-standing structure that is being used for the same purpose it was erected for. The massive, 12-meter high Herodian walls have been a silent witness to many great conquerors: the Romans, Byzantines,  Crusaders, Mongols, Mamelukes, Ottomans and others. If the stones could speak, they would testify to how the conquerors disappeared, while the people of Israel outlived them all.

From the time of Abraham, Hebron has always been central to the Jewish people’s connection to the land of Israel. It may have been for this reason that Emperor Hadrian decided to build a slave market in Hebron in wake of Shimon Bar Kochba’s failed uprising in the year 135 CE. During this terrible period of Jewish history, tens of thousands of Jewish slaves were sold and sent to all parts of the Roman Empire. Today, remains of the slave market still exist in Hebron in what is called Mamre.

HEBRON UNDER MOSLEM AND CHRISTIAN RULE

During the Byzantine period, Hebron suffered, just as the rest of Israel did, under the yoke of the occupiers. The Byzantine Empire became Christianized and turned the Herodian structure over the Cave of Machpela into a church.

When Mohammed conquered the Middle East in the 7th Century, the Byzantine church over the Tomb of the Patriarchs and Matriarchs was converted into a mosque. Initially, the Muslim religion was relatively indifferent to Hebron. Descriptions from this period don’t mention Hebron at all. In this initial period of Muslim occupation, they treated the Jews very tolerantly. For 500 years, both Jews and Muslims came to the tomb and arranged various welcoming celebrations for adherents of other religions who visited.

The crusaders conquered Hebron in the year 1099, and again converted the tomb into a church. Towards the end of the period of Crusader rule, in 1166, the great Jewish sage Rambam (Maimonides) visited Hebron and wrote, “On Sunday, 9 Marcheshvan (October 17), I left Jerusalem for Hebron to kiss the tombs of my ancestors in the Cave. On that day, I stood in the cave and prayed, praise be to God, (in gratitude) for everything.”

This tolerance for other religions ceased when the Mamelukes came to power. In 1267 C.E. the Mamelukes forbade non-Muslims from entering or worshipping in the tomb complex, only permitting Jews to go as far as the seventh step in the stairway leading to the tomb’s entrance. It was only after 1967 that Jews and Christians were again able to enter and pray freely at the holy site. 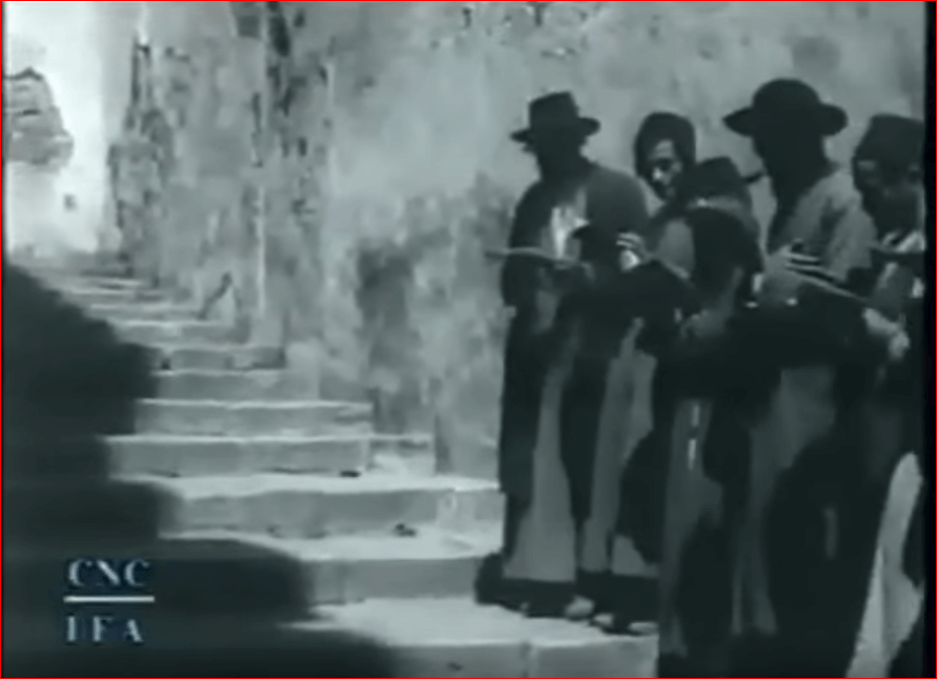 In 1517 C.E., the Ottoman Empire brought an end to Mameluke control. This was the beginning of the longest occupation of Israel. During the first years, the Turks distinguished themselves by bringing order and safety to the region.

The Jewish community made use of the opportunity to start a new period where important rabbis greatly contributed to the evolution of Kabbalah. The Jews who had been deported from Spain came to Hebron and purchased farm-land to renew the Jewish Quarter.

In 1540, Jewish exiles from Spain, under Rabbi Malchiel Ashkenazi founded a congregation around the Abraham Avinu (Our Father Abraham) synagogue. One particular year – according to local legend – when the requisite quorum for prayer was lacking, the Patriarch Abraham himself appeared to complete the quorum; hence, the name of the synagogue.

In the 18th and 19th Centuries, students  from Europe such members of the Chabad hasidic movement and the Slabodka Yeshiva relocated to the area. In 1870, a wealthy Turkish Jew, Haim Yisrael Romano, purchased a plot of land and built a large residence and guest house, which came to be called Beit Romano. The building later housed a synagogue and served as a yeshiva.

Chabad in particular has a rich history in Hebron, dating to the years 1816-1823, when a wave of hasidic Jews migrated from Tzfat in Israel’s north, to Hebron at the behest of the Mitteler Rebbe, Rabbi Dovber of Lubavitch, the second Rebbe of Chabad.

His daughter, Menucha Rochel Slonim moved to Hebron in 1845 with the blessing and encouragement of her brother-in-law, the Tzemach Tzedek, Rabbi Menachem Mendel Schneersohn.  She was regarded as a matriarch to Hebron’s community, and the Menucha Rochel synagogue was named in her honor. The synagogue was destroyed in the wake of the 1929 massacre and was restored in 2005 under the leadership of the Rabbi Danny Cohen and his wife Batsheva. Today it is a fully functioning synagogue with daily services. 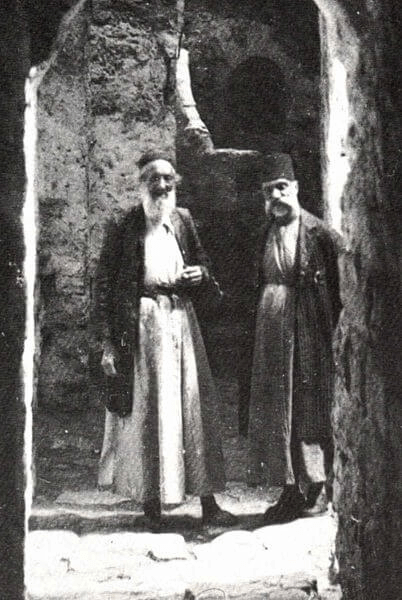 In 1893, a clinic was built by the Hebron Jewish community, and a second floor was added in 1909. It was named Beit Hadassah when the Hadassah Women’s Zionist organization sponsored the facility which served both the city’s Jewish and Arab populations 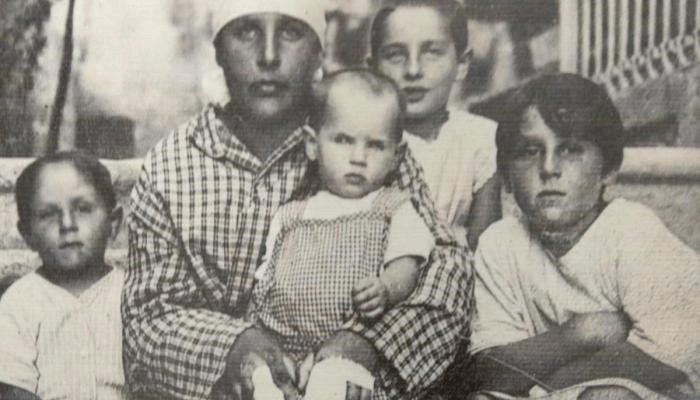 On August 23, 1929, local Arabs devastated the Jewish community by perpetrating a large-scale, organized, pogrom. According to the Encyclopedia Judaica:

“The assault was well planned and its aim was well defined: the elimination of the Jewish settlement of Hebron. The rioters did not spare women, children, or the aged; the British gave passive assent. Sixty-seven were killed, 66 wounded, the community was destroyed, synagogues razed, and Torah scrolls burned.”

A total of 59 of the 67 victims were buried in a common grave in the Jewish cemetery (including 23 who had been murdered in one house alone, and then dismembered), and the surviving Jews fled to Jerusalem. However, in 1931, 31 Jewish families returned to Hebron and re-established the community. This effort was short-lived, and in April 1936, fearing another massacre, the British authorities evacuated the community.

Following the creation of the State of Israel in 1948, and the invasion by Arab armies, Hebron was captured and occupied by the Jordanian Arab Legion. During the Jordanian occupation, which lasted until 1967, non-Muslims were not permitted to live in the city, nor — despite the Armistice Agreement — to visit or pray at the Jewish holy sites in the city. Additionally, the Jordanian authorities and local residents undertook a systematic campaign to eliminate any evidence of the Jewish presence in the city. They razed the Jewish Quarter, desecrated the Jewish cemetery and built an animal pen on the ruins of the Avraham Avinu synagogue. 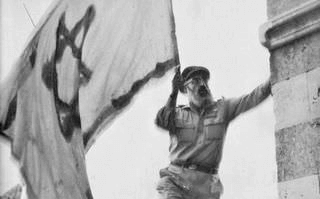 In the Six Day War, Hebron was liberated from Jordanian occupation by Rabbi Shlomo Goren, Chief Rabbi of the IDF, without firing a shot. When the Jews returned to Hebron, they found that the old Jewish Quarter had been destroyed and the cemetery devastated.

In 1968, a group of Jews held a Passover seder at Hebron’s  Park Hotel. This was a prelude to their renting out the facility and using it as a springboard to  re-establish a permanent community in the city. . The actions sparked a nationwide debate and drew support from across the political spectrum. After an initial period of deliberation, Prime Minister Golda Meir’s Labor-led government decided to temporarily move the group into a near-by IDF compound, while a new community — to be called Kiryat Arba — was built adjacent to Hebron. The first 105 housing units were ready in the autumn of 1972. Today, Kiryat Arba has over 8,000 residents.

The Jewish community in Hebron itself was re-established permanently in April 1979, when a group of Jews from Kiryat Arba moved into Beit Hadassah

In May 1980 six Jews were murdered and 20 wounded just outside of Beit Hadassah as they were returning from prayer at the Tomb of the Patriarchs. Prime Minister Menachem Begin’s Likud-led government subsequently agreed to permit Jews to remain in Beit Hadassah and move into the adjacent Beit Chason and Beit Schneerson buildings, in the old Jewish Quarter. In 1986, an additional floor was built on Beit Hadassah with residential apartments for 11 families.

Since 1980, other Jewish properties and buildings in Hebron have been redeemed and rebuilt. Today, nearly 1,000 Jews live in Hebron, including some 350 students of the Shavei Hevron yeshiva, which is located in the old Beit Romano building. Hebron’s Jewish community is fortunate to have approximately 10,000 residents of the Har Hevron Regional Council area which includes nearby Kiryat Arba and over a dozen smaller communities.

Hebron is home to many Jewish historical sites such as the Tombs of Jesse and Ruth, Othniel Ben Knaz, and Abner Ben Ner.

The Tel Hevron archaeological site is one of the newest Israel National Parks Authority sites.

Abraham’s Spring is believed to date back to the time of Abraham and Sarah.  Many visitors come to bathe and purify themselves in its cold refreshing water.

The Ancient Jewish cemetery, dating to the 13th century, is the resting place of many well-known Jewish sages who wanted to be buried in the city of the Patriarchs.

The Tomb of the Patriarchs and Matriarchs is the most well known landmark and receives over 700,000 visitors a year.

Popular times to visit Hebron include Parshat Chayei Sarah, the Shabbat weekend in which the Torah portion describing Abraham’s purchase of the Cave of Machpelah is read. Other popular events include the annual Passover music festival and annual Sukkot music festival.  Because the modern day heroes living in Hebron, the Ma’arah is accessible to people of all faiths and observances.  This enables government infrastructure, security and tourism to flourish.