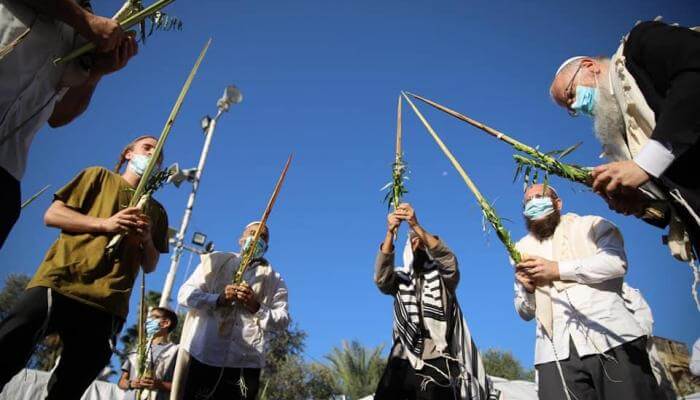 Over 15,000 people watched the early morning Succot prayer service in Hebron on the internet on Wednesday as part of a new effort to bring the spirit and energy of the City of the Forefathers & Mothers to the public. Due to the COVID-19 pandemic, only a select few participated in person for Shacharit prayers at the Tomb of Machpela, but the entire world was invited online.

It has become a modern tradition twice a year for the Chief Rabbi of Tzfat, Rabbi Shmuel Eliyahu to lead special musical Hallel prayers on Passover and Sukkot at the Jewish holy site.

The event usually attracts around 30,000 participants. However, as the coronavirus has spread, events across the Jewish State have shut down and moved to Zoom and Facebook. Thousands of viewers watch the Passover Hallel prayers six months ago, and an equal amount tuned in this week for Succot.

Hallel is a special collection of Psalms and songs of praise recited on Jewish holidays. In Hebron, the prayers are accompanied by live musicians for an uplifting spiritual experience. Usually the service is held inside the Tomb of the Patriarchs & Matriarchs complex, the 2,000-year-old complex built by King Herod the Great on top of Biblical “Cave of Machpela.” It is here that the founding fathers and mothers of the Jewish people are buried as described in the Torah. In strict accordance with the Israeli Ministry of Health, services were held outside at the Rochelle Berkowitz Plaza and worshippers wore masks and practiced socially distancing.

In 2019, Hebron received over 1 million tourists, the most ever recorded, with the High Holidays being peak time for visitors. This year was a more introspective and intimate affair, with small outdoor gatherings in limited numbers. However the spirit of the City of the Patriarchs and Matriarchs was broadcast via Facebook, YouTube, Zoom and other social media. In September, over 16,000 people watched the post Rosh Hashanah selichot services featuring Israel’s two Chief Rabbis.

This year, after Yom Kippur ended, the community was deeply saddened to learn that Rabbinit Miriam Levinger had passed away. She and her husband Rabbi Moshe Levinger were pioneers in rebuilding the Jewish community. She was considered modern day matriarch. As a testimony to how far the community has come due to her efforts, Mrs. Levinger was mourned by numerous Members of Knesset, and elected officials including the President of the State of Israel, Reuven Rivlin.

Part of the Wednesday morning Sukkot service included a prayer for all those suffering from coronavirus, and for all medical personnel and researchers working to eradicate the deadly virus.