Prayer requests being taken remotely to be recited at the Tomb of the Patriarchs. 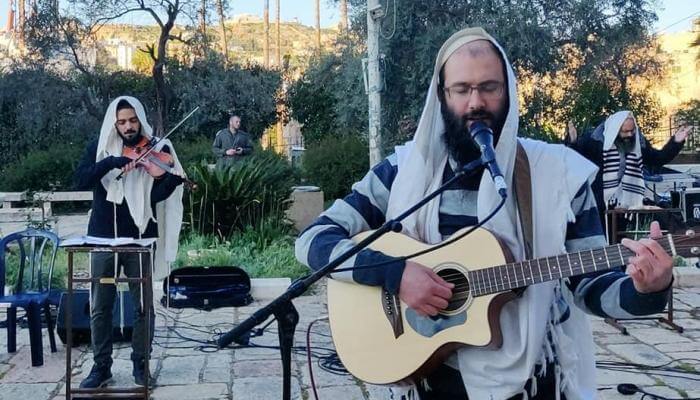 The annual musical prayer gathering took place in Hebron for Passover online this year due to the COVID-19 pandemic. The week-long Passover holiday usually includes a music festival with top-name singers from Israel and abroad performing outside the Tomb of the Patriarchs attracting between 25,000 – 30,000 people. The Hall of Isaac & Rebecca, the largest in the Tomb complex is opened to the public with Rabbi Shmuel Eliyahu, chief rabbi of Tzfat leading an inspirational musical prayer service to crowds from around the country.

This year there were a total of ten people.

Rabbi Eliyahu, joined by a group of locals, recited the morning Shaharit prayers, as thousands watched live as the gathering streamed simultaneously on Facebook and YouTube. The Facebook stream alone receievd over 30,000 views by the end of the day.

The festive Hallel prayer was led by Rabbi Uriel Saieed on guitar joined by a violinist and flutist as the participants sang and danced. However, unlike the thousands that usually attend, each participant was spaced apart and no one held hands.

The livestreams received numerous positive comments as prayer requests poured in from around the world.

The Jewish community is continuing its live streaming broadcasts for prayer services every weekday.

Live prayers can be viewed on Hebron’s Hebrew Facebook page, and on the Jewish Community’s YouTube channel.

Prayer requests and names of the sick are being recited by local Jewish community members. Anyone is free to submit names and prayers using the online form at hebronfund.org/send-a-prayer.

All gatherings are conducted in accordance with Ministry of Health directives with proper social distancing.

The courtyard of the Tomb of the Patriarchs and Matriarchs is one of two public places designated for prayer services during the coronavirus outbreak. The other is the Western Wall in Jerusalem.

Yishai Fleisher, the international spokesman for the Jewish community of Hebron held a virtual tour of the city via Zoom. The tour was one of four cities featured as part of a special Passover project by the Just One Chesed organization. The number of participants reached capacity on Zoom and gained even more views on Facebook.

Over Passover the community mourned the passing of Rabbi Eliyahu Baskshi-Doron, former Sephardic Chief Rabbi of Israel due to COVID-19.

Rabbi Bakshi-Doron zt”l was one of the great friends of the Jewish Community of Hebron. He personally knew the residents, participated in many community events, and gave encouragement to the residents and leadership.

The rabbi had great difficulty walking for the last number of years and, in the absence of handicapped access, he agreed to be carried in a wheelchair, up and down 100 stairs to the Tomb of the Patriarchs & Matriarchs. Despite the discomfort, he refused to miss the opportunity to pray in the holy site.

Born in Jerusalem to an Iranian Jewish immigrant father and a Syrian Jewish mother, the rabbi studied at several prominent yeshivas including the Jerusalem-based Hebron Yeshiva, which used to be located in Hebron.

In 1975, he was appointed Sephardi Chief Rabbi of Haifa, where he remained for the next 18 years, eventually leaving in 1993 to gain international renown when he became the Rishon LeZion, Israel’s Chief Sephardi Rabbi.

The community also mourned the loss of another dear partner of Hebron, Rabbi Leibel Groner, one of the most prominent figures of Chabad of the last generation. Rabbi Groner zt”l served as a secretary to the Lubavitcher Rebbe for over 40 years and was a scholar in his own right. Rabbi Groner visited Hebron many times and has family roots here to Rebbetzin Menucha Rochel Slonim.