לשכנו תדרשו Inviting the Holy Presence in Our Holy Land

These Are the Borders of the Land 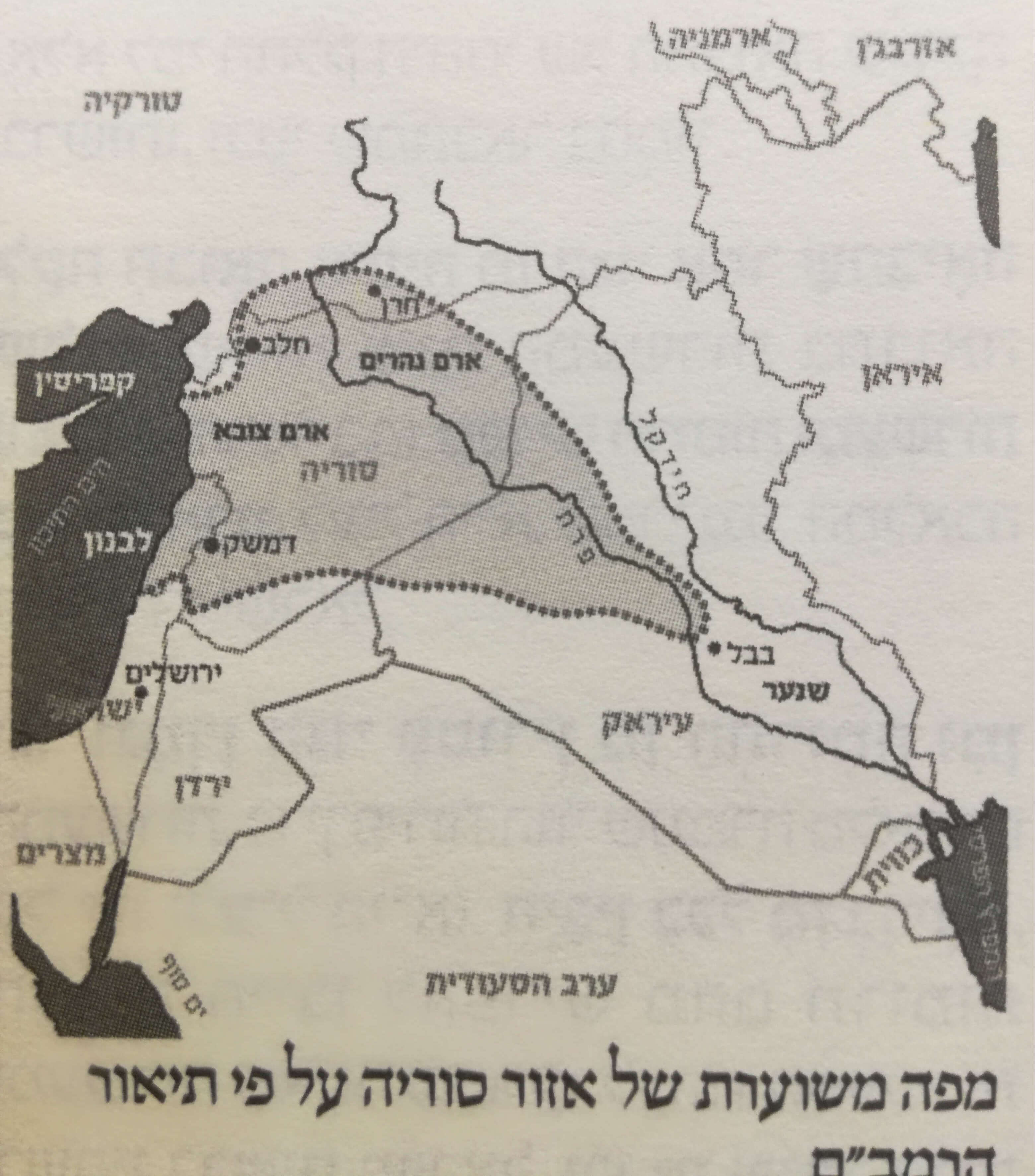 In regard to “Syria” [not necessarily the country of Syria today – see attached map of halachic “Syria”], Rambam teaches us: “The lands which [King] David conquered outside of the Land of Canaan, e.g., Aram Naharaim, Aram Tzovah, Achlab, and the like, even though he was a King of Israel and he was acting with the consent of the High Court, is not considered as the Land of Israel with regard to all matters, nor is it like the Diaspora, i.e., Babylonia and Egypt with regard to all matters. Instead, it was removed from the category of the Diaspora, but did not enter the category of Eretz Yisrael. Why was its level considered lower than that of Eretz Yisrael? Because David conquered them before he conquered all of Eretz Yisrael. Instead, there were still members of the seven nations there. If, however, he had conquered Eretz Yisrael entirely, in all of its boundaries, and afterwards conquered other lands, his entire conquest would have been equivalent to Eretz Yisrael with regard to all matters. The lands which [King] David conquered are called Syria. There are dimensions of [the laws that apply to] Syria that resemble [the laws that apply in] Eretz Yisrael and there are dimensions of [its laws] that resemble [those which apply] in the Diaspora. A person who purchases landed property [in Syria] is comparable to one who purchases [land] in Eretz Yisrael with regard to terumot, tithes, and the Sabbatical year. All [the laws that apply] in Syria are of Rabbinic origin.

For example, a law that applies to “Syria” is: “If a person [merely] purchases produce from a gentile [in Syria] – whether it was harvested or [still] connected to the earth – he is exempt, because [the produce] does not come from his land [whereas in the Land of Israel he is obligated].
In regard to the areas of Egypt, Babylon, and of Amon and Moav, the Rabbis enacted that some laws of terumot and maser apply in these areas, Rambam explains, because these lands are close to Eretz Yisrael, and in this way the poor people in Eretz Yisrael on Shmita year receive benefit. This benefit is that that, despite the Rabbinic prohibition on Shmita year called “sfihin” on vegetables that grew in the Land of Israel [Proper] and also despite the fact that the poor of the Diaspora do not receive regular support from agriculture [since of the [regular] Diaspora is exempt of such gifts that are beneficial to the poor], these poor can rely on the produce of these other lands which, due to this enactment, must give gifts to the poor and maaser from these lands.

In regard to all other places in the Diaspora the laws of the Land of Israel do not apply there except for a few exceptions, such as the taking of halla (which Biblically is mandatory only in the Land of Israel), gifts to the poor from the field such as peah, leket, etc., and some other laws, albeit on a rabbinic level.

Next week we will continue on our series for the “three weeks” on the borders of the Land of Israel in Tanach, halacha, and according to the Kabbalah. This series is meant to serve as a type of “rectification” of the sin of the spies which occurred on Tisha Bav. God-willing, may we merit, through the inspiration of Hebron which Kaleb absorbed in fighting the plot of these spies, to rectify this sin, the ultimate cause of the dire events of Tisha Bav, by this discussion of the borders of the Holy Land through the inspiration of Hebron today.

Real Stories from the Holy Land

At the end of these three weeks we will continue with “Real Stories.”