The Russian church may lose out to a Muslim endowment who challenged the Palestinian Authority over land rights. 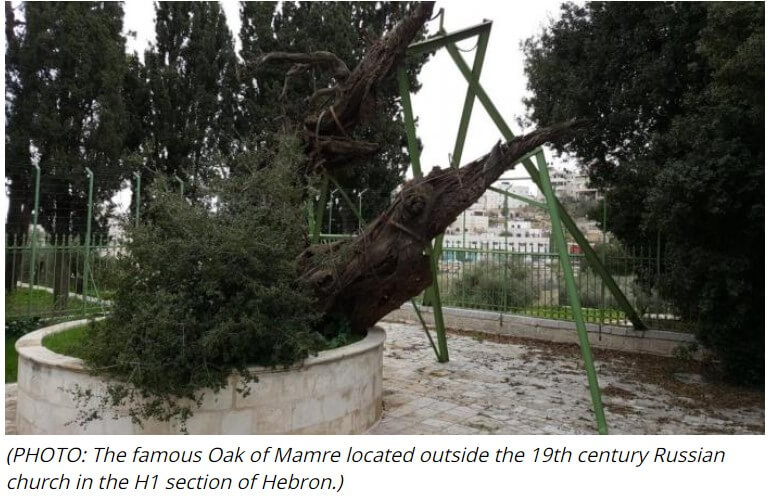 After over 100 years, the land upon which sits the historic Russian church in Hebron may fall under the custodianship of the Tamim al-Dari Endowment. This week, the Palestinian Authority High Court of Justice ruled the endowment had legal rights to the land. In 2016, Palestinian Authority President Mahmoud Abbas agreed to allow the Russian Orthodox Church to renew a 99-year-lease. The move caused great furor and even rioting with the al-Tamimi clan who claim legal rights based on the 6th-century Muslim feudal lord Tamim al-Dari.

THE FAMOUS OAK OF ABRAHAM

The site of the famous Oak of Abraham, also known as the Eshel Avraham or Oak of Mamre, was acquired in 1868 by Archimandrite Antonin (Kapustin) for the Church of Russia. The Monastery of the Holy Trinity was founded nearby where to this day it is manned by several Russian monks. It is known in Arabic as Al-Moscobiyeh or Moscovia.

For generations, Christians have believed it to be the tree that the Biblical patriarch sat under when he was visited by the three angels as described in Genesis. The venerated tree once attracted countless pilgrims of various faiths. Medieval travelers, both Christian and Jewish have mentioned visiting the tree during their travels to Hebron. A different site, the Elonei Mamre archaeological park, also in Hebron, is thought to be an older traditional site of where the tree was located.

The church was held by the Russian Orthodox Church Outside Russia from the time of the Russian Revolution until Hebron was divided in 1997 and that side of the city fell under the jurisdiction of the Palestinian Authority. In July of 1997 PA police seized it and turned it over to the more sympathetic Moscow Patriarchate. PA forces were accused of attacking the monks and nuns and forcibly removing them, turning the property over to the custodians of their choosing, based on PA leader Yasser Arafat’s past affiliation with the Soviet Union.

In 2016 former PA Prime Minister Rami Hamdallah took possession of the site for the benefit of the Russian Ecclesiastical Mission in Jerusalem in exchange for financial compensation to the al-Tamimi clan, the alleged legal heirs of Tamim al-Dari. They refused to receive the compensation according to a report in Glavnoe News. This prompted the Tamim al-Dari Endowment to file a lawsuit in the PA Supreme Court of Justice. They told Maan News Agency last week they plan to construct buildings on the land.

The endowment stated that in 628, Tamim al-Dari, a Christian convert to Islam and a friend of the Prophet Mohammed, was granted a fiefdom that included Hebron and the surrounding areas. The PA Supreme Court ruled that any land that once belonged to Muslims must be returned, TAAS News reported.

FIEFS AND FEUDALISM IN ARAB COMMUNITIES

Tamim al-Dari was from the Banu al-Dar, a clan of the Lakhm tribe based in what is today Saudi Arabia, Iran, and Iraq before the Islamic conquest. He met Muhammad, founder of Islam, in 628 BCE when he led a delegation of Banu al-Dar members. Previously Muhammad granted the Banu al-Dar a part of the revenues of conquered land after the Muslim victory at the Battle of Khaybar. This battle was fought in the year 628 between Muslims and the Jews living in the oasis of Khaybar, in today’s Saudi Arabia. For almost a thousand years it was home to one of the largest ancient Jewish communities in the history of the Jewish people. The Jews were defeated and forced from their homes, their property and belongings being confiscated by Muhammad’s army.

Al-Dari confronted Muhammad to receive a portion of the looted revenue. He converted to Islam after meeting him. He was granted a large qita’a (akin to a fief) for control of Hebron, Beit Einun (the Biblical Beth Anoth) and the surrounding Hebron Hills area. This took place when the Land of Israel was still under Byzantine control. When the Muslims conquered the Land of Israel in 634, al-Dari acquired the territory. He was originally a tax collector. For generations after, Arab communities in the Land of Israel were ruled by feudal landowners, often from foreign Muslim lands as the case with the 1834 Peasants’ revolt.

According to tradition, al-Dari is buried in Bayt Jibrin, the site of the Biblical cities of Beit Gubrin and Maresha, northwest of Hebron. An old stone tomb located there is referred to as the Maqam of Sheikh Tamim, traditionally taken to be Tamim al-Dari.

When the Ottoman Empire conquered the Land of Israel, they challenged their fellow Muslims as to the legality of Tamim al-Dari’s fiefdom asserting that he had no male heirs and doubting his descendants’ claims.

Today, the story of Tamim al-Dari is used by some Muslims to lay claim to Hebron, including plots of land that Muslim residents openly sold to non-Muslims.

(This article was originally published here)