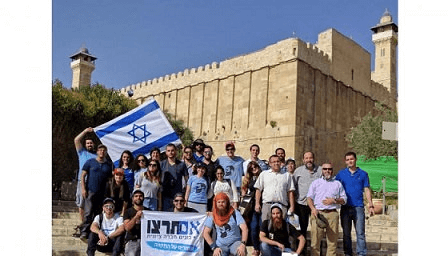 The Tel Hebron (Tel Hevron) / Admot Yishai neighborhood continues to reveal a treasure trove of archaeological artifacts dating back thousands of years. The most recent excavations were once again conducted by the Israel Antiquities Authority and have uncovered a mikvah (Jewish ritual bath), and homes belonging to Jewish residents during the Second Temple Era.
The team also worked to clean up the heaps of garbage that has been dumped by local non-Jewish residents on the hillside. 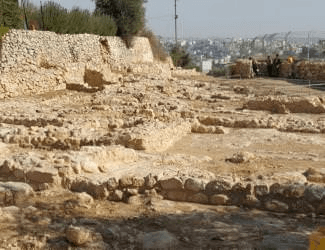 (Photo: The slope in the empty field became a convenient place for citizens of H1 Hebron to dump garbage, which has sat for years.)

In 2014, the Israel Antiquities Authority and Ariel University led by archaeologists Prof. Emanuel Eisenberg and Prof. Shlomo Ben-David uncovered mikvot next to wine presses. Historians explain that the wine was for ritual use in the Holy Temple in Jerusalem and thus the wine makers would immerse in the mikvah to become purified before beginning work. Next to the wine presses is an area where the workers would then package wine and olive oil into containers. 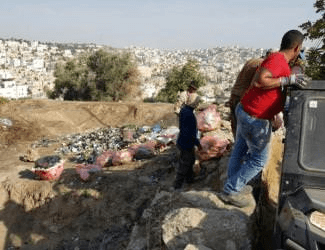 (Photo: The seemingly empty tract of land revealed remains of buildings from the Jewish community during the Second Temple Era.)

Both the 2014 discoveries and the new finds are located on the hillside near the ancient “Cyclopean wall” behind the Tomb of Jesse and Ruth. Thousands of visitors are expected for the annual Shabbat Hebron on the weekend of Parshat Chayei Sarah. This year’s celebration is expected to be bigger than every thanks to an anonymous donor who is sponsoring a Chabad tent offering free meals in what may turn out to be the largest Shabbat gathering in history.

Last year’s Shabbat Hebron was marred by a terrorist shooting incident in which two people were injured by bullets. An American college student, 20-year-old Eli Borochov, was injured but nevertheless expressed interest in returning this year.
This year’s event will come on the tales of the latest vote by the United Nations UNESCO vote to condemn Israel which erases any Jewish connection to Hebron and Jerusalem.