Music, prayer, kids activities and more return to Hebron after a difficult year.

Music, kids activities, free tours, and open access to the ancient Tomb of the Patriarchs and Matriarchs took place during Hebron’s scaled-back Passover festivities as visitors were happy to see a return to life after a year of COVID-19 lock-downs.

Now that over 60% of the country has been vaccinated, Israelis and tourists enjoyed a happy Pesach vacation with national parks and historical sites opened.

Known in Hebrew as Olam Yitzchak, the large hall is the location of the memorial markers for Isaac and Rebecca and the site of the opening into the Cave of Machpela. It is usually reserved for Muslim prayers and accessible ten days out of the year for Jewish holidays, while the normally Jewish areas of the site are accessible for Muslims on Muslim holiday as per the rotation agreement with the Islamic Waqf who share joint custody.

This year, there were separate entrances and exits with no cut through to the different sections and visitors were requested to stay only 20 minutes to allow the maximum number of people access. The Ministry of Health capped attendance at 500 people at time. Despite the restrictions, visitors enjoyed the site, taking into consideration last year’s lock-down and prayers for those suffering from the pandemic were recited.

The normally Jewish side of the ancient complex adhered to the purple badge system and did not require a green pass because it is a more open-air section.

The Tomb of the Patriarchs and Matriarchs is revered as the burial site of the Biblical founding fathers and mothers, purchased by Abraham for 400 shekels as described in the book of Genesis. The surrounding structure was built by King Herod the Great during the Second Temple period and closely resembles the Temple Mount and Western Wall in Jerusalem which was built during the same era.

In normal years, the annual Passover festival features popular musicians from Israel and abroad who perform on stage, attracting between 25,000 – 30,000 people.

The bi-annual Shacharit Hallel prayers at dawn with musical accompaniment was held outdoors and as usual led by Rabbi Shmuel Eliyahu, chief rabbi of Tzfat with Rabbi Uriel Saieed on guitar joined by violinists and other musicians. Last year’s prayers were restricted to a small group and live streamed. The prayer gathering is usually held inside.

As the traditional holiday melodies were played, worshipers sang and danced outside the site of the Cave of Machpela. 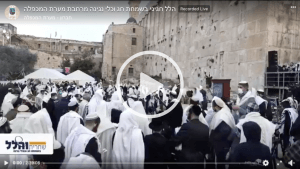 The tomb of Avner Ben-Ner was open on Tuesday and Wednesday and a special tour of the Tomb of Othniel Ben Knaz located in the Palestinian Authority section of Hebron took place on Wednesday.

Other sites that attracted visitors were the Touching Eternity visitor center at the Beit Hadassah building and the Tel Hevron archaeological site with artifacts from 2,000 years ago.

Among the many that visited during the Pesach holiday were Jonathan Pollard and his wife Esther. Pollard’s visit drew many onlookers curious about the man who spent 30 years in an American prison for passing classified information to Israel that dealt with Arab chemical and biological weapons capabilities. Pollard and his wife moved to Israel several months ago. They recited the blessing of thanksgiving at the Tomb of the Patriarchs. 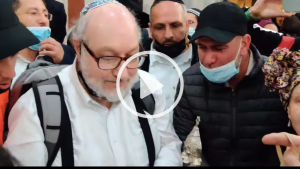 The Jewish community of Hebron thanks the co-organizers of the various events including the Association of Community Rabbis, the Mount Hebron Community Council, the Israeli Ministry of Culture and Sport, the Kiryat Arba – Hebron Community Council, the Hebron Religious Council, the Egged bus company, the Israel Nature and Parks Authority, the police the IDF, Magen David Adom, all security and medical personnel and all volunteers who made this a smooth and successful event. The Jewish community of Hebron and the Hebron Fund look forward to more festive holiday activities so that all can enjoy this special, historic, inspiring city.