The purchase of the Cave of the Machpela, as the first land purchase in the Land of Israel, is used by our sages as the prototype for the Laws of Acquisition.

Our sages point out that the lesson of the Torah story of the purchase describes four different methods by which land can be acquired. In order to secure the purchase, Abraham made use of all four methods:
“… (and the land came) to Abraham as an acquisition…”- with money, with a deed, with witnesses and with a physical hold. 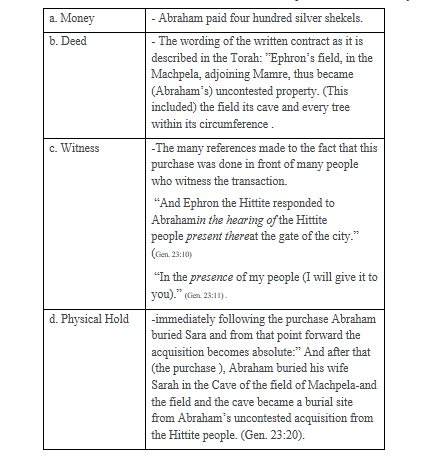 These verses became the basis of Mishnaic and Talmudic teachings describing the legal aspects of valid contractual obligations. Furthermore, the Midrash explains that though all purchase methods are acceptable, the most definite and decisive one is that of physical hold since it establishes a permanent reality and this is what Abraham did when he buried Sara in the cave.

This transaction, according to Jewish scholars, would have to withstand much scrutiny and testing through future generations. The Midrash says:

When the patriarch Jacob spoke his last will and testament before his sons, he said: ”I am being gathered unto my people, carry me to the cave which is in the field of Ephron the Hittite and bury me with my fathers.” (Gen. 49:29)

They said to him: ”Which is this cave?”

He said to them: ”In the cave of the Machpela-when you see a double cave you will know that this is the place. And why is it called “Machpela-(doubled), because all who are buried there are rewarded manifold.”

They asked him: ”On which plain it is located?”

He said to them: ”Next to Mamre’s property”.

They asked him: “By what right are you entering the cave?”

He said: ”By the right of my grandfather Abraham who purchased it.

As it is said: ”Which Abraham purchased from the people of Ephron the Hittite as a possession to be a burial place.  And just as Abraham and Sarah, and Isaac and Rebecca are buried in pairs, so too, bury me next to my wife Leah.” As it is said: “And there I buried Leah”.

They said: ”We fear that the Hittite people may come and claim that the field was not Ephron’s but theirs”.

He said to them: “Do not fear. When Abraham purchased the cave it was “In the presence of the Hittite people”. Were there to have been any claims they would have alleged them during that time. Therefore, it is said:” and the field and its cave became an uncontested possession to Abraham from the Hittite people” (not only from Ephron the seller).